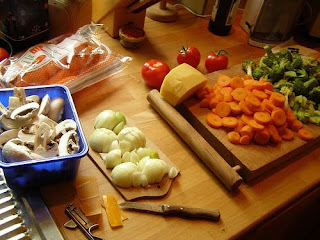 We need to cook at home...the more you eat out, the more likely you are to be fat, say obesity experts who have studied the link between eating at restaurants and obesity — which are both on the rise.
A third of the calories Americans eat come from restaurants, including fast-food franchises, which is almost double what it was 30 years ago, according to the U.S. Department of Agriculture.
"For the average consumer, eating one meal away from home each week translates to roughly two extra pounds a year," said Lisa Mancino, a food economist for the USDA.
More than half of adults eat out three or more times a week, and 12 percent eat out more than seven times a week. As a result, the pounds are adding up.
Posted by Jolie Root at 7:38 AM