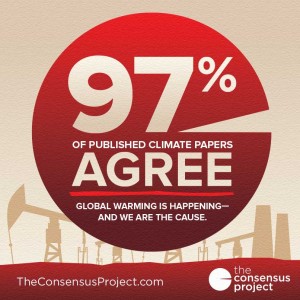 You might think that 97% consensus among the scientific community would motivate our intelligent US public to demand some sensible changes to energy policies… BUT WAIT… 57% of the public is NOT yet ready to accept the science of man made global warming. Why not? Because of pseudonews organizations
(Yes Fox and Drudge, I’m talking about you) promoting the fossil fuel funded, pseudo-science talking points designed to keep said 57% of the public slumbering on in a mind numbed delusional state of false security. And those same fossil fuel lobbyists get voters to keep their fossil fuel elected puppets in Washington to maintain oil, gas, coal, carbon based energy policies at status quo, choking the atmosphere with CO2 emissions at an unprecedented rate. Frack you if you don’t fall into line. Sunscreen anyone? Gas mask?

Quoting comment from the study, which you can read here.

"The public perception of a scientific consensus on man-made global warming is a necessary element in public support for climate policy (Ding et al 2011). However, there is a significant gap between public perception and reality, with 57% of the US public either disagreeing or unaware that scientists overwhelmingly agree that the earth is warming due to human activity (Pew 2012). Read the Pew study here.
Contributing to this 'consensus gap' are campaigns designed to confuse the public about the level of agreement among climate scientists. In 1991, Western Fuels Association conducted a $510 000 campaign whose primary goal was to 'reposition global warming as theory (not fact)'. A key strategy involved constructing the impression of active scientific debate using dissenting scientists as spokesmen (Oreskes 2010). The situation is exacerbated by media treatment of the climate issue, where the normative practice of providing opposing sides with equal attention has allowed a vocal minority to have their views amplified (Boykoff and Boykoff 2004). While there are indications that the situation has improved in the UK and USA prestige press (Boykoff 2007), the UK tabloid press showed no indication of improvement from 2000 to 2006 (Boykoff and Mansfield 2008).
The narrative presented by some dissenters is that the scientific consensus is '...on the point of collapse' (Oddie 2012) while '...the number of scientific "heretics" is growing with each passing year' (Allègre et al 2012). A systematic, comprehensive review of the literature provides quantitative evidence countering this assertion.
The number of papers rejecting man-made global warming is a miniscule proportion of the published research, with the percentage slightly decreasing over time. Among papers expressing a position on man-made global warming, an overwhelming percentage (97.2% based on self-ratings, 97.1% based on abstract ratings) endorses the scientific consensus on man-made global warming."

Keeping your smile healthy may depend on antioxidants!

A new study on periodontal disease shows the importance of using the energy supplement CoEnzyme Q-10 on a daily basis.

Researchers have found that coenzyme Q10 when applied topically to teeth for 28 days can reduce plaque induced gingivitis.

The authors conclude "Promising results were obtained after the application of coenzyme Q10 as well as when it was used as an adjunct to scaling and root planing for treatment of plaque induced gingivitis".

Periodontal pathogens can induce ROS overproduction and thus may cause collagen and periodontal cell breakdown. When ROS are scavenged by antioxidants, there can be a reduction of collagen degradation.

Ubiquinol (a highly absorbable form of coenzyme Q-10) serves as an endogenous antioxidant which increases the concentration of Coenzyme Q-10 in the diseased gingiva and effectively suppresses advanced periodontal inflammation.

The pharmacology of coenzyme Q-10 indicates that it may be an agent for treatment of periodontitis. On the basis of on new concepts of synergism with nutritional supplements and host response, coenzyme Q-10 may possibly be effective as a topical and/or systemic role or adjunctive treatment for periodontitis either as a stand-alone biological or in combination with other synergistic antioxidants (i.e., vitamins C and E).

Read about the study here.
Posted by Jolie Root at 4:18 AM No comments: 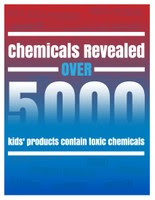 Over 5000 children's products contain toxic chemicals linked to cancer, hormone disruption and reproductive problems, including the toxic metals, cadmium, mercury and antimony, as well as phthalates and solvents. A new report by the Washington Toxics Coalition and Safer States reveals the results of manufacturer reporting to the Washington State Department of Ecology. Read the whole report here.