Get your Greek on! 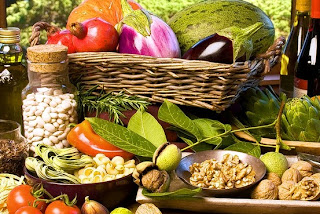 Eating a Mediterranean diet -- rich in produce, olive oil and fish -- improves brain functioning and lowers the risk of Alzheimer's disease, according to a new review of the available research.
The review, which you can see here, was published in the journal Epidemiology. It includes 12 studies, nine of which showed an association between eating a Mediterranean diet and having lower Alzheimer's risk, improved cognitive functioning and lower rate of cognitive decline.
Missing however, were any links between the diet and development of mild cognitive impairment.
Mediterranean food is both delicious and nutritious, and the systematic review shows it may help to protect the aging brain and reduce the risk of dementia.


Other recent research has connected eating a Mediterranean-style diet with a lower risk of diabetes, longer life, and a reduced risk of heart disease.
Posted by Jolie Root at 7:19 AM No comments: Sometimes, a good cup of tea really can clear your head and help you think more clearly. A daily habit of green tea may even promote the growth of brain cells and revitalize memory and learning capabilities.
Researchers at the University of California, Davis, have been studying how green tea influences brain function and boosts memory. Now Chinese researchers have confirmed findings that Green tea favorably affects the generation of brain cells and provides benefits for memory and spatial learning.

The compound in green tea responsible for boosting brain power is a chemical called epigallocatechin-3 gallate (EGCG). It’s an antioxidant that improves cognitive function by promoting growth and function of neurons (nerve cells) in the brain.

Neural effects of green tea extract on dorsolateral prefrontal cortex. European Journal of Clinical Nutrition (2012) 66, 1187–1192;
Posted by Jolie Root at 7:00 AM No comments: