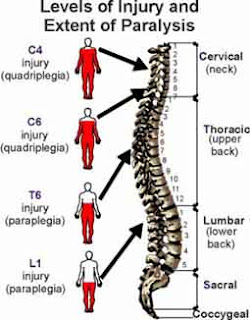 UK Spinal Cord and Brain Injury Research Center (SCoBIRC) - have discovered that in experimental models, severe spinal cord injury can be treated effectively by administering the supplement acetyl-L-carnitine or ALC, a derivative of essential amino acids that can generate metabolic energy, soon after injury.
The researchers previously reported that following spinal cord injury, the mitochondria, or energy generation components of cells, are overwhelmed by chemical stresses and lose the ability to produce energy in the form of the compound adenosine triphosphate (ATP). This leads to cell death at the injury site and, ultimately, paralysis of the body below the injury level.
Results soon to be published show that administration of ALC soon after a paralyzing injury promoted the milestone recovery of the ability to walk. Unlike the animal control group given no ALC, which regained only slight hind limb movements, the group treated with ALC recovered hind limb movements more quickly and were able to stand on all four limbs and walk a month later. Critically, such remarkable recovery was correlated with significant tissue sparing at the injury site following administration of ALC.
Because ALC can be administered orally, and is well-tolerated at relatively high doses in humans, researchers believe that their discovery may be translated easily to clinical practice as an early intervention for people with traumatic spinal cord injuries.
Samir P. Patel, Patrick G. Sullivan, Travis S. Lyttle, Alexander G. Rabchevsky. Acetyl-l-carnitine ameliorates mitochondrial dysfunction following contusion spinal cord injury. Journal of Neurochemistry, 2010
Posted by Jolie Root at 10:00 AM