Fish may protect the brain as we age, providing significant reduction in risk of Alzheimers

People who eat baked or broiled fish at least once a week may be protecting their brains from Alzheimer’s disease and other brain problems, researchers reported Wednesday. 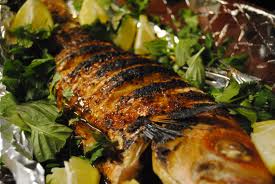 Cyrus Raji of the University of Pittsburgh Medical Center and colleagues conducted brain scans on 260 healthy adults and examined whether there was a relationship between the amount of gray matter, which is crucial to maintaining a healthy brain, and their risk of developing Alzheimer’s or a condition known as mild cognitive impairment (MCI) over the next five years.
After taking into consideration factors such as age, gender, education, race, physical activity and obesity, the researchers found that those who regularly consumed baked or broiled fish on a weekly basis were more likely, a decade later, to have more gray matter in several key parts of the brain, including the hippocampus, the posterior cingulate and the orbital frontal cortex, the researchers reported at the annual meeting of the Radiological Society of North America in Chicago. In addition, those who were regular fish eaters were almost five times less likely to develop MCI or Alzheimer’s, the researchers found. The fish eaters also scored higher on tests measuring thinking abilities, such as working memory, they said.
“Consuming baked or broiled fish promotes stronger neurons in the brain’s gray matter by making them larger and healthier,” Raji said in a news release. “This simple lifestyle choice increases the brain’s resistance to Alzheimer’s disease and lowers risk for the disorder.”
Sorry Mrs Paul, no such protective effect was found for those who ate fried fish.
Posted by Jolie Root at 11:37 AM