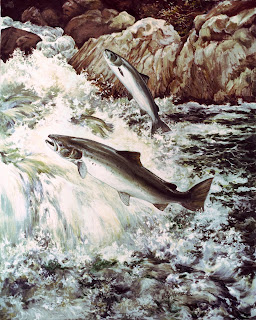 Women who eat about three servings of fish per week have a somewhat lower chance of having polyps found during a routine colonoscopy than women who eat just one serving every two weeks, according to a new study.
The research doesn't prove that seafood protects against polyps, but it "does increase our confidence that something real is going on," said Dr. Edward Giovannucci, a professor at the Harvard School of Public Health in Boston, who was not involved in this study.
A polyp, also called an adenoma, is a mushroom-shaped tag of tissue that grows in the colon and can develop into colorectal cancer.
The idea researchers have been pursuing is that the omega-3 fats in fish might have an anti-inflammatory effect, similar to aspirin, that could prevent the development of polyps.
Giovannucci said that earlier experiments in animals have showed that omega-3 fats can reduce the risk of this cancer, but that studies of humans have had mixed results.
In the latest study, the researchers surveyed more than 5,300 people about their eating habits. All of the participants had come in to the researchers' practices for a colonoscopy.
The team then compared more than 1,400 women without polyps to 456 who had adenomas detected during the procedure.
Among women with adenomas, 23 percent were in the bottom fifth among fish eaters, while 15 percent were in the top fifth. That means people who eat lots of seafood are somehow protected against polyps, because otherwise the percentages should have been the same.
After accounting for differences like age, smoking and aspirin use, women who ate the most fish -- three servings a week -- were 33 percent less likely to have a polyp detected than those who ate the least -- less than a serving a week.
Adenomas are generally believed to be the precursor" to cancer.
A 33 percent lower risk is not enormous,it is important because colorectal cancer is a common cancer.
About 140,000 new cases of colon and rectal cancer are diagnosed each year in the United States, and more than 50,000 people will die from the cancer. The lifetime risk of developing the disease is about 20 percent, according to the American Cancer Society.
Men in the study who ate a lot of fish did not see the same reductions in polyp risk as women, however.
It is possible men are less sensitive to the omega-3s in fish and need to eat more to get any benefit. It could also be that men might eat more omega-6 fats, counteracting the effects of the omega-3s.
Omega-6 fatty acids are related to the production of a hormone called prostaglandin E2, which is associated with inflammation.
Eating omega-3 fatty acids tamps down the body's levels of omega-6 fatty acids. In turn, the body then has reduced levels of prostaglandin E2.
The women in the study who ate more fish -- and presumably, more omega-3s -- had lower levels of prostaglandin E2.
People who have higher levels of this (hormone) are more likely to develop colorectal cancer. So in essence, by eating more omega-3 fatty acids, it's almost like taking an anti-inflammatory medication.
Posted by Jolie Root at 9:43 AM