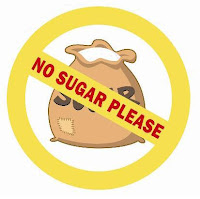 Throw out the sugar packets, skip the sweet tea, and just say no to sugar sweetened soft drinks...if you want to do everything you can to keep your heart healthy. So say the results of a new Harvard study.


Just one sugar-sweetened drink a day may be enough to raise a man’s risk for heart disease, a new study suggests.
Men who drank just one sugary drink a day had a 20% higher risk of heart disease than did non-drinkers, says researcher Frank Hu, MD, PhD, professor of nutrition and epidemiology at the Harvard School of Public Health.
"This study provides strong evidence that higher consumption of sugary beverages is an important risk factor for heart disease," he says. "Even moderate consumption -- one soda per day -- is associated with a 20% increased risk."
Hu's team followed nearly 43,000 men in the Health Professionals Follow-up Study. Previously, they conducted a similar study with women enrolled in the Nurses' Health Study. In that study, they also found a link between sugar-sweetened drinks and heart disease.
"In this one we tried to replicate the results in men," he tells WebMD. The results are very consistent, he says. "That is really enhancing the validity of the findings."
The team found a link, but that does not prove cause and effect. The study is published in the journal Circulation.
Naturally, the Sugar Association, an industry group, took exception with the findings, stressing that sugar is not the main culprit, but lifestyle. So did the American Beverage Association.
Men who drank sugar-sweetened drinks daily had higher indicators for heart disease than the non-drinkers did.
Those who had a daily sugar-sweetened drink had higher levels of blood fats called triglycerides, a risk factor for heart disease. They had lower levels of HDL or "good"cholesterol, another risk factor.
American Heart Association (2012, March 12). Sugar-sweetened drinks linked to increased risk of heart disease in men. ScienceDaily. Retrieved March 13, 2012, from http://www.sciencedaily.com­/releases/2012/03/120312162744.htm
Posted by Jolie Root at 12:56 PM