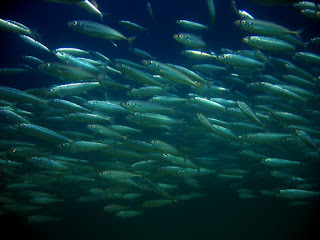 Temple University scientists have discovered that blocking activity of an enzyme in the brain protects the brain. DHA and EPA from fish block that enzyme. Take your DHA and EPA everyday!
In previous studies, the Temple researchers discovered that 5-lipoxygenase, an enzyme long known to exist in the brain, controls the activation state of gamma secretase, another enzyme that is necessary and responsible for the final production of amyloid beta. When produced in excess, amyloid beta causes neuronal death and forms plaques in the brain. The amount of these amyloid plaques in the brain is used as a measurement of the severity of Alzheimer's.
The researchers published their findings, “Pharmacologic Blockade of 5-Lipoxygenase Improves the Amyloidotic Phenotype of an AD Transgenic Mouse Model,” in the American Journal of Pathology.
Posted by Jolie Root at 8:41 AM