Supermoon! Get Ready To Do Some Howling! 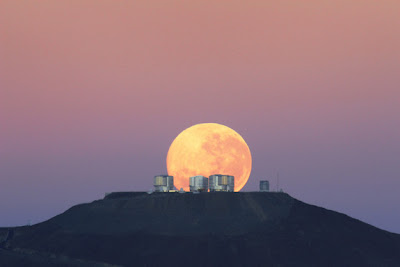 The dazzling full moon sets behind the Very Large Telescope in Chile's Atacama Desert in this photo released June 7, 2010 by the European Southern Observatory. The moon appears larger than normal due to an optical illusion of perspective. Photo CREDIT: Gordon Gillet, ESO.


Thanks to a fluke of orbital mechanics that brings the moon closer to Earth than that it has been in more than 18 years, the biggest full moon of 2011 will occur on Saturday, leading some observers to dub it a "supermoon."
On Saturday afternoon at 3 p.m. Eastern Daylight Time, the moon will arrive at its closest point to the Earth in 2011:  a distance of 221,565 miles (356,575 kilometers) away. And only 50 minutes earlier, the moon will officially be full.
At its peak, the supermoon of March may appear 14 percent larger and 30 percent brighter than lesser full moons (when the moon is at its farthest from Earth), weather permitting. Yet to the casual observer, it may be hard to tell the difference.
http://www.space.com/11163-supermoon-biggest-full-moon-2011.html
Posted by Jolie Root at 12:17 PM