Get cold sores? Treat them quickly!

Researchers Link Herpes to Alzheimer’s Disease; “Cold Sores” Connected to Cognitive Decline.
Researchers recommend people treat a cold sore as quickly as possible to minimize the amount of time the virus is actively traveling through a person’s nervous system. The faster a cold sore is treated, the faster the HSV1 returns to a dormant stage.
How prevalent is this virus? In developed countries such as the U.S., approximately 20 percent of children are infected with HSV1 prior to the age of five. By the second and third decades of life, as much as 60 percent of the population is infected, and late-in-life infection rate reaches 85 percent.
Here's the journal article:
Herpes Simplex Virus Dances with Amyloid Precursor Protein while Exiting the Cell.
Read it here. 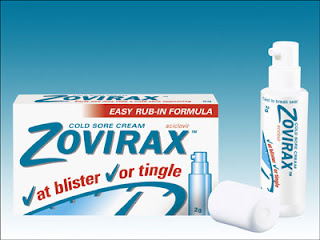 Zovirax or acyclovir is an antiviral drug that slows the growth and spread of the herpes virus so that the body can fight off the infection. Zovirax contains an active antiviral ingredient called acyclovir. Acyclovir stops the herpes virus from spreading from one host cell to other normal cells. Acyclovir converts itself into a more active agent inside the infected cells of the body. Then, it blocks the action of an enzyme called DNA polymerase which copies the herpes virus’ genetic material from RNA to DNA. By blocking DNA polymerase, Zovirax prevents the multiplication and growth of the herpes virus. This allows the body to treat the existing outbreak and relieve the pain caused by cold sores.