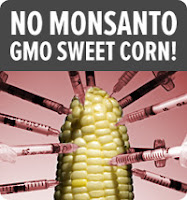 I thank CredoAction http://www.credoaction.com/ for the good work they are doing to raise awareness about this issue. From their petition: Right now, Monsanto, the corporation responsible for producing roughly 90% of genetically modified seeds around the globe, is working to bring their new, GMO sweet corn to a grocery store aisle or farmer's market near you.1

Unlike Monsanto's other GMO crops -- which are primarily fed to animals -- this sweet corn is intended for direct human consumption.
This is the first time Monsanto has engineered a vegetable that could be served straight to your dinner table. And if this unlabeled, and potentially toxic crop succeeds, Monsanto is sure to bring us even more.
As an activist and consumer, you are in a powerful position to pressure leading U.S. grocery stores to reject Monsanto's new GMO corn.
Tell U.S. food companies: Americans don't want Monsanto's GMO sweet corn in our grocery stores!
Monsanto's GMO sweet corn is engineered to tolerate the herbicide Roundup, and to produce the insect-killing pesticide Bt.
If that sounds dangerous to eat, there's good reason.
A past study released by the International Journal of Biological Sciences found that Monsanto's GMO corn led to organ failure in mammals.2 This GMO corn has also recently been linked to a sharp spike in livestock infertility, as high as 20% -- a health problem that could potentially pose a risk to humans.3
But shockingly, just as other GMO foods are not required to have special labeling, consumers will have no way of knowing if they're purchasing Monsanto's new genetically modified sweet corn.
Tell U.S. grocery stores: Americans don't want Monsanto's GMO sweet corn!
Some of Monsanto's GMO corn is already in human food -- used to make additives in processed food products -- and even in small quantities it's having scary effects.
This past spring a Canadian study found that the GMO toxin inserted in Bt corn was found in the bloodstreams of 93 percent of pregnant women4 -- just from its presence in processed grains and highly processed food products.
Now, grocery stores could be on the verge of delivering up this toxic corn, and its toxic effects, in much higher doses and without processing, and we wouldn't even know what we were eating.
We must raise our voice as consumers and urge grocery stores to reject Monsanto's potentially dangerous new product, and stop this dangerous trend of Monsanto-made, straight to table products.
Sign the Petition here.
1 Monsanto Plans To Sell Sweet Corn In Your Local Supermarket August 8, 2011.
2 Monsanto's GMO Corn Linked To Organ Failure, Study Reveals March 18, 2011.
3 Dr. Huber's Warning: How GMOs Are Linked to Disease and Infertility May 4, 2011.
4 GM Food Toxins Found In The Blood of 93% of Unborn Babies May 20, 2011.
Posted by Jolie Root at 7:44 AM