Get out of that chair! Sitting linked to dramatic increase in cancer.

We already knew that sitting for prolonged periods of time was linked to increased rates of diabetes and heart disease, now we can add cancer to the list. And worse...the risk exists even if you exercise although it is more pronounced if you don't and it is reduced if you take short exercise breaks during the day. 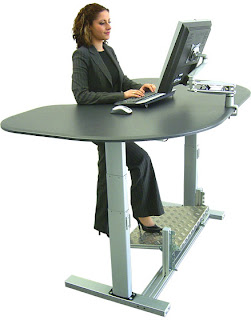 According to research presented at the American Institute for Cancer Research (AICR), up to 173,000 new cases of cancer could be prevented annually in the US if people sat less.1 The two types of cancer that seem to be the most influenced by sitting too much include breast cancer, with 49,000 cases annually directly attributed to long periods of sitting, and colon cancer, with 43,000 cases. Scientists also found that less sitting might prevent 37,200 cases of lung cancer, 30,600 cases of prostate cancer, 12,000 cases of endometrial cancer and 1,800 cases of ovarian cancer. And this is a conservative estimate, says Christine Friedenreich of Alberta Health Services in Calgary, Canada, who conducted research on the link between cancer and sedentary lifestyles.
Before you despair, know that a few minutes each hour on your feet moving around helps. In fact it is a lifesaver for those of us who are stuck sitting during working hours.

Needless to say, being a couch potato at night and on the weekends doesn't help matters.
During the workday moving for a minute or two every hour or even better every half hour leads to smaller waistlines, less insulin resistance, and lower levels of inflammation -- all risk factors for cancer. Apparently, it only takes a few minutes of activity to break up prolonged periods of sitting to decrease levels of cancer-causing compounds in the body such as C-reactive protein, which is associated with inflammation leading to breast cancer, as well as glucose and fat molecules in the blood.
If you work at a desk, consider refurnishing your office with a standing desk. If you work at home, use a headset and stand up and walk around for phone calls.
Rettner, Rachael. "Prolonged Sitting Linked to Breast and Colon Cancers." 3 November 2011. Scientific American. 8 December 2011
Doheny, Kathleen. "Is Sitting Too Long a Major Cancer Risk?" 3 November 2011. WebMD. 9 December 2011.
Posted by Jolie Root at 9:50 AM