I am so intrigued with the idea of preserving lemons. As I said I'm doing some today... It's a Moroccan thing, lemons in brine that keep for months in the refrigerator and can be the spark of life for so many different recipes.

I saw them first in Ina Garten's kitchen..(no I wasn't really there) I was watching Barefoot Contessa on Food Network. She is living a fine life that woman...that barn..that garden? I have serious envy of her garden in summer. I'm hoping for a fine temperate climate one day so that I can garden for more than 12 weeks. She has huge organized sections of herbs for cooking and flowers for cutting including an incredible row of Hydrangeas...but I digress...

Ina and a friend were making a Moroccan Chicken dish in a Tangine Baker and the dish called for preserved lemons WOW I perked right up...I grabbed the iPad and started taking notes and resolved that I must keep preserved lemons on hand henceforth. That was about eight weeks ago...sigh....ok I do live a busy life...so here is the relatively quick Barefoot Contessa method..from my notes:

(You're putting everything in a glass baking dish)
3 lemons, sliced into sixths lengthwise, sprinkled with 2-3 tablespoons kosher salt
(don't you HATE recipes that are not specific? I know...here's why this one isn't..she didn't measure, she grabbed what appeared to be a healthy handful of salt and tossed it over the lemons...)
Cover the lemons and salt with water, bake for three hours at 250F allow to cool and then store in a jar in the refrigerator...for up to six months!

And if it all just sounds like too too much..you can buy them from Williams Sonoma, $10
http://www.williams-sonoma.com/products/les-moulins-mahjoub-preserved-lemons/?pkey=e|les%2Bmoulins%2Bmahjoub%2Bpreserved%2Blemons|1|best|0|1|24||1&cm_src=PRODUCTSEARCH||NoFacet-_-NoFacet-_-NoMerchRules-_- 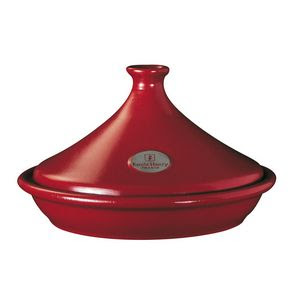 Here is the ingredient list for the chicken dish they made...the link to the recipe is below if it sounds yummy to you...oh..and here is a Tangine, quite a lovely one from Emile Henry (Oh God Emile Henry ceramics..don't get me started..) which you can get via Amazon, but any good heavy baking dish will do quite nicely...

the rest of the recipe is here...to give credit where credit is due...
http://www.foodnetwork.com/recipes/ina-garten/moroccan-chicken-tajine-recipe/index.html

And one more recipe that promises even more flavor...yes I'm making them all....

A clean jar big enough to hold all of the lemons
Here's how to make them.....
Start by almost quartering the lemons. To do this, slice off the very end of your lemon so that you have a flat surface to work with. Stand the lemon on its now flat bottom and cut vertically about three quarters of the way down. Don't cut all the way through!
Now cut vertically again, quartering the lemon, only three quarters of the way down so the lemon is held together by its end.
Stuff the center of each lemon full as you can with salt and then squeeze it back together. Put a tablespoon of salt in the bottom of the jar along with the rest of the ingredients except the lemon juice and start packing your salty lemons in.
Press down on the lemons as you go so their juice comes out, making it easier to pack every last one in. If the juice from the lemons doesn't completely cover them, top the jar up with your extra lemon juice. The lemons have to be completely covered, but you'll have to leave a bit of air space between the surface of the juice and the lid. Put the lid on and shake. Put them in the refrigerator and shake them once a day or so...they'll be ready in a month...
Posted by Jolie Root at 9:38 AM